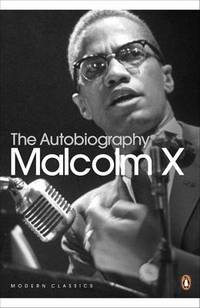 The autobiography of Malcolm X

The autobiography of Malcolm X

Publisher: Penguin. Utg. 2001. Trade Paperback. 512 p. This book is brand new. Language: Engelska --- Information regarding the book: Malcolm X's The Autobiography of Malcolm X was written in collaboration with Alex Haley, author of Roots, and includes an introduction by Paul Gilroy, author of The Black Atlantic, in Penguin Modern Classics. From hustling, drug addiction and armed violence in America's black ghettos Malcolm X turned, in a dramatic prison conversion, to the puritanical fervour of the Black Muslims. As their spokesman he became identified in the white press as a terrifying teacher of race hatred; but to his direct audience, the oppressed American blacks, he brought hope and self-respect. This autobiography (written with Alex Haley) reveals his quick-witted integrity, usually obscured by batteries of frenzied headlines, and the fierce idealism which led him to reject both liberal hypocrisies and black racialism. Vilified by his critics as an anti-white demagogue, Malcolm X gave a voice to unheard African-Americans, bringing them pride, hope and fearlessness, and remains an inspirational and controversial figure. Malcolm X (1925-65), born Malcolm Little in Omaha, and also known as El-Hajj Malik El-Shabazz, lost both his parents at a young age.Leaving school early, he soon became part of Harlem's underworld, and in 1946 he was sentenced to ten years' imprisonment. It was in prison that Malcolm X converted to Islam. Paroled in 1952, he became an outspoken defender of Muslim doctrines, formed the Organization of Afro-American Unity in 1963, and had received considerable publicity by the time of his assassination in 1965. If you enjoyed The Autobiography of Malcolm X, you might like Nelson Mandela's No Easy Walk to Freedom, also available in Penguin Modern Classics. 'This extraordinary autobiography is a brilliant, painful, important book' The New York Times

The Autobiography of Malcolm X was written by Alex Haley between 1964 and 1965, as told to him through conversations with Malcolm conducted shortly before Malcolm X's death (and with an epilogue after it), and published in 1965. The book was named by Time magazine as one of the most important nonfiction books of the 20th century.

Seller rating:
This seller has earned a 4 of 5 Stars rating from Biblio customers.
Biblio.co.uk member since: 2009
Umea
Ask Seller a Question

Antiquarian bookstore with focus on fiction and the humanities. We also sell new books.

New
A new book is a book previously not circulated to a buyer. Although a new book is typically free of any faults or defects,...[more]
trade paperback
Used to indicate any paperback book that is larger than a mass-market paperback and is often more similar in size to a hardcover...[more]