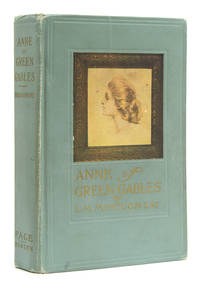 Condition
Bound in the publisher's ribbed light teal cloth, with gilt lettering to the front board and spine, illustration of a woman's pr
Seller
James Cummins Bookseller
Seller rating:
This seller has earned a 5 of 5 Stars rating from Biblio customers.
New York, New York

Anne of Green Gables is the first novel by Canadian author Lucy Maud Montgomery. The story tells of the adventures of Anne Shirley, an 11-year-old orphan girl who is mistakenly sent to Matthew and Marilla Cuthbert, a middle-aged brother and sister who had intended to adopt a boy to help them on their farm in Prince Edward Island. Like many of her contemporaries, Montgomery did not consider submitting her first novel to a Canadian publisher, convinced that a more lucrative deal could be made with an American firm. The novel was completed in 1905, but was rejected by four major American publishing houses, and it was not until 1907 that Montgomery found a publisher. L.C. Page & Co. finally published Anne of Green Gables in 1908. Anne of Green Gables has sold more than 50 million copies and has been translated into more than 30 languages. Following the success of her first novel, Montgomery went on to write seven more books about Anne, following the beloved protagonist through adulthood and motherhood. Several novels in the series have been adapted and made into a successful television miniseries. Montgomery museums, plays, and houses on Prince Edward Island draw international visitors.

For juveniles? Realy? I am 58 and always liked it. And tears drop on my cheeks every time.

All items, as usual, are guaranteed as described and are returnable within 30 days if not as described. Within the United States, all books are shipped UPS unless otherwise requested (please provide a street address). Overseas orders should specify shipping preference. All postage is extra. New clients are requested to send remittance with your orders. Libraries may apply for deferred billing. All New York and New Jersey residents must add the appropriate sales tax. We accept American Express, Master Card, and Visa. All items are subject to prior sale; prices are subject to change.

Founded in 1978 by James Cummins, the firm has grown to include two New Jersey locations as well as the main store at 699 Madison Avenue (between 62nd and 63rd Streets) in New York City.Hours: Monday - Friday 10:00 a.m. to 6:00 p.m. (During July & August, until 4:00 p.m. on Fridays.)The Madison Avenue store is a seventh-floor oasis for book-lovers, a quiet and pleasantly furnished book room with a carefully chosen, expertly catalogued and broad-based selection of fine and rare books, autographs, manuscripts, and works of art. We have built notable private collections for American and international clients. Our stock is always changing, and our steady input from private buying and public auctions assures our clients of new surprises (and temptations!) at each visit. Our stock covers a wide range of collecting interests, with particular emphasis in the following fields: British and American Literature, Sporting Books, Private Press and Illustrated Books, 19th-Century Color Plate Books, Americana, Travel, Sets and Fine Bindings, History, and Authors' Manuscripts and Letters. Our catalogued inventory exceeds 50,000 titles, much of which can be searched on the internet. In addition, our New Jersey warehouse contains over 400,000 books in all subject areas. We might have the books you're looking for.

Cloth
"Cloth-bound" generally refers to a hardcover book with cloth covering the outside of the book covers. The cloth is stretched...[more]
cracked
In reference to a hinge or a book's binding, means that the glue which holds the opposing leaves has allowed them to separate,...[more]
rubbing
Abrasion or wear to the surface. Usually used in reference to a book's boards or dust-jacket.
New
A new book is a book previously not circulated to a buyer. Although a new book is typically free of any faults or defects,...[more]
gilt
The decorative application of gold or gold coloring to a portion of a book on the spine, edges of the text block, or an inlay in...[more]
inscribed
When a book is described as being inscribed, it indicates that a short note written by the author or a previous owner has...[more]
A.N.
The book is pristine and free of any defects, in the same condition as ...[more]
spine
The outer portion of a book which covers the actual binding. The spine usually faces outward when a book is placed on a shelf....[more]