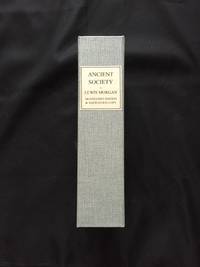 ANCIENT SOCIETY; or, Researches In the Lines of Human Progress From Savagery, Through Barbarism to Civilization

ANCIENT SOCIETY; or, Researches In the Lines of Human Progress From Savagery, Through Barbarism to Civilization

Seller rating:
This seller has earned a 5 of 5 Stars rating from Biblio customers.
Biblio.co.uk member since: 2015
Lake Forest, Illinois
Ask Seller a Question

shaken
A hardcover in which the text block is loose, but still attached to the binding.
G
Good describes the average used and worn book that has all pages or leaves present. Any defects must be noted. (as defined...[more]
rubbing
Abrasion or wear to the surface. Usually used in reference to a book's boards or dust-jacket.
Association copy
An association copy is a copy of a book which has been signed and inscribed by the author for a personal friend,...[more]
spine
The outer portion of a book which covers the actual binding. The spine usually faces outward when a book is placed on a shelf....[more]
Cloth
"Cloth-bound" generally refers to a hardcover book with cloth covering the outside of the book covers. The cloth is stretched...[more]
title page
A page at the front of a book which may contain the title of the book, any subtitles, the authors, contributors, editors, the...[more]
First Edition
In book collecting, the first edition is the earliest published form of a book. A book may have more than one first edition in...[more]