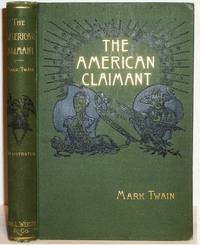 New York: Charles L. Webster, 1892. First Edition. Hardcover. Fine. First Edition (no Library of Congress date of publication recorded, preventing any priority-of-issue determination). 8vo: xvi,17-277,[1],[8, advertisements]pp, with frontispiece and 23 pen-and-ink illustrations by Dan Beard. Publisher's original olive-green pictorial cloth, upper cover stamped in black (vignette of stars and stripes, beneath which are the English lord and the American claimant) and lettered in gilt, spine lettered in gilt and stamped in black with the ornament of an eagle. A Fine copy with only trivial faults: points and spine ends rubbed, very slight toning to page edges, otherwise fresh, tight and unmarked. BAL 3434. Johnson, p.53. McBride, p. 134. Twain's comedy of mistaken identities and multiple role switches was published first in various newspapers by the McClure Syndicate and later in the Idler magazine, in 12 numbers. He wrote the novel with the help of recently invented (by Edison) phonographic dictation (precursor of the Dictaphone), supposedly the first author to do so. The novel was also (according to Twain) an attempt to write a book without mention of the weather, again, the first of its kind in fictitious literature. Indeed, all the weather in The American Claimant is contained in an appendix, at the back of the book, which the reader is encouraged to turn to from time to time. Note: With few exceptions (always identified), we only stock books in exceptional condition, preserved in archival, removable polypropylene sleeves. All orders are packaged with care and posted promptly. Satisfaction guaranteed.

spine
The outer portion of a book which covers the actual binding. The spine usually faces outward when a book is placed on a shelf....[more]
edges
The collective of the top, fore and bottom edges of the text block of the book, being that part of the edges of the pages of a...[more]
First Edition
In book collecting, the first edition is the earliest published form of a book. A book may have more than one first edition in...[more]
BAL
Bibliography of American Literature (commonly abbreviated as BAL in descriptions) is the quintessential reference work for any...[more]
fine
A book in fine condition exhibits no flaws. A fine condition book closely approaches As New condition, but may lack the...[more]
Cloth
"Cloth-bound" generally refers to a hardcover book with cloth covering the outside of the book covers. The cloth is stretched...[more]
gilt
The decorative application of gold or gold coloring to a portion of a book on the spine, edges of the text block, or an inlay in...[more]
tight
Used to mean that the binding of a book has not been overly loosened by frequent use.