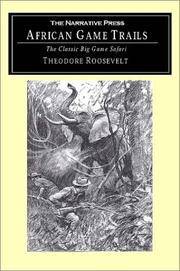 African Game Trails: An Account of the African Wanderings Of an American Hunter-Naturalist

African Game Trails: An Account of the African Wanderings Of an American Hunter-Naturalist

Theodore Roosevelt declined to run for reelection as President of the United States in 1908. Partly as a vacation, partly to avoid the press as his friend Taft set up a new administration, (and partly for self-promotion), T.R. set out for Africa to hunt big game and collect specimens for a future exposition at the Smithsonian. Scribner's magazine underwrote the trip by paying $50,000 for twelve articles. It is these articles that eventually became African Game Trails.In April 1909, T.R. and his son Kermit arrived in Mombasa. With an entourage of 250 porters and guides, the Roosevelts spent a year snaking across British East Africa, into the Belgian Congo and back to the Nile, ending in Khartoum. This narrative is a straightforward chronicle of the trip, laced with tips on tracking and hunting African big game, and observations and opinions about Africa and its peoples, many of which are politically incorrect by today's standards. T.R. believed in the inferiority of most African peoples and recommended they be civilized by European rule.For the most part, however, African Game Trails is a book about big game hunting. Over the course of the year, the Roosevelts collected (i.e. shot) 1,100 specimens, including eleven elephants, twenty rhinoceroses, seventeen lions, twenty zebra, seven hippopotamuses, seven giraffes, and six buffalo. This was a different era, to be sure. In a way that makes the account all the more valuable. African Games Trails is well-written and rolls along easily, like a good, long, after-dinner story. It is also a striking record of early 20th-century African culture and natural history. It is great fun and highly recommended for the non-squeamish.

10 day return guarantee, with full refund including shipping costs for up to 10 days after delivery if an item arrives misdescribed or damaged.

Seller rating:
This seller has earned a 2 of 5 Stars rating from Biblio customers.
Biblio.co.uk member since: 2012
TORRINGTON, Wyoming
Ask Seller a Question

We specialize in western history, gun knife and hunting titles. Also try to stock Wyoming history titles. We have a walk-in store on US Hwy 26/85 the most direct route to Fort Laramie National History site..We have what I think is the largest seleciton of weapons titles in SE Wyoming, both new and used. Always looking for good used weapons titles.

spine
The outer portion of a book which covers the actual binding. The spine usually faces outward when a book is placed on a shelf....[more]
tight
Used to mean that the binding of a book has not been overly loosened by frequent use.
New
A new book is a book previously not circulated to a buyer. Although a new book is typically free of any faults or defects,...[more]
pb
...[more]
reprint
Any printing of a book which follows the original edition. By definition, a reprint is not a first edition.