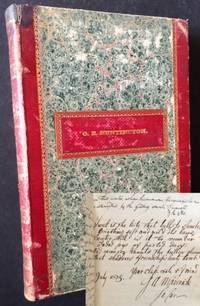 by The Yearbook of Oliver Ellsworth Huntington

New Haven, CT: Yale College, 1825. 1/4 leather. Very Good +. The 1825 Yale College Yearbook (then called "Class-book"). This copy belonged to a student named Oliver Ellsworth Huntington, who had this copy bound in a decorative red leather over marbled boards, with his name in gilt block letters printed across the front panel. This is by far the earliest yearbook this bookseller has seen, some 14 years before the advent of photography. Apparently, each Yale student was given a blank book at the beginning of the school year and was expected to have his classmates fill the book in during the course of the year with handwritten tributes to the particular graduating senior. Apart from the yearbook's obvious scarcity in its own right, what's also so notable is some of the classmates of Huntington who wrote tributes (many of them quoted poems but many also long, heartfelt digressions). Among Huntington's classmates were Samuel Augustus Maverick, the legendary Texas lawyer and land baron who was an original signer of the Texas Declaration of Independence. (With his fiercely independent streak, Maverick was also responsible for inspiring the creation of the word "Maverick"). In addition to Maverick, other classmates included 1) Rev. George William Perkins (Abolitionist active in the Underground Railroad); 2) Elias Warner Leavenworth (Mayor of Syracuse and Congressman from NY (1875-1877)); 3) William Moseley Holland (Co-Valedictorian); 4) Willis Hall (Co-Valedictorian and NY State Attorney General (1839-1842)); 5) Rev. Richard Falley Cleveland (Father of President Grover Cleveland); 6) Rev. William Twining (established a young ladies' seminary in Madison, Indiana (which became Wabash College) and was a noted Abolitionist); 7) Worthington Hooker (Professor of Medicine at Yale, VP of the American Medical Association (1864); 8) William Bennett Fleming (Georgia Congressman (1879)); 9) John Simkus Butler (Author of pioneering works on the study and "curability" of insanity); 10) Seabury Ford (Governor of Ohio (1849-1850)); 11) William Gelston Bates (Massachusetts House of Representatives (1868)); 12) Simeon North (President of Hamilton College (1839-1857)). Given its age, the book has held up very nicely and remains solid, firm and VG to VG+, with light, forgivable rubbing along the panels and a bit of wear at the spine and its crown. Huntington's son has written in ink on the front free endpaper: "The Yale College Class-book of my Father Oliver Ellsworth Huntington". The book measures 7 1/2" tall x 5" wide and includes the lengthy inscriptions of 80 some classmates (between the Class of 1825 AND the Class of 1824). A wonderful piece of Americana -- and of course of Yale history.

Seller rating:
This seller has earned a 5 of 5 Stars rating from Biblio customers.
Biblio.co.uk member since:
Waccabuc, New York
Ask Seller a Question

gilt
The decorative application of gold or gold coloring to a portion of a book on the spine, edges of the text block, or an inlay in...[more]
Marbled boards
...[more]
rubbing
Abrasion or wear to the surface. Usually used in reference to a book's boards or dust-jacket.
spine
The outer portion of a book which covers the actual binding. The spine usually faces outward when a book is placed on a shelf....[more]
VG
Very Good condition can describe a used book that does show some small signs of wear - but no tears - on either binding or...[more]