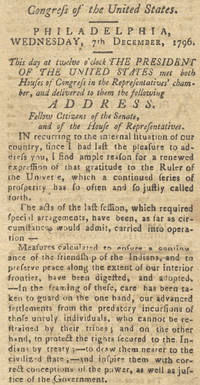 Contemporary Eastern Shore, Maryland newspaper printing of George Washington's eighth and final State of the Union Address. His address was delivered to Congress in Philadelphia during his final months as the first President of the United States and before his retirement from public life at Mount Vernon.

Comprising over four and one-half newspaper columns-over a third of the entire newspaper, the address was drafted with the assistance of his long-time advisor and friend Alexander Hamilton.Â¹ This assistance is particularly evident in Washington's speaking about commerce, "the encouragement of manufactures," the need for a strong navy, and the "institution of a Military Academy."

Additionally, Washington speaks of a "continuance of the friendship of the Indians," of a failed attempt in Georgia to buy a parcel of land from the Creek nation, and of the "Treaty of Amity, Commerce and Navigation" [Jay Treaty] between the U.S. and Great Britain. He also discusses the treaty with Spain, relations with "the Dey and the Regency of Algiers," and the "Act of Congress...for the protection and relief of American Seamen."

Declaring that "[o]ur trade has suffered, and is suffering, extensive injuries in the West Indies from the Cruizers and Agents of the French Republic," Washington appears to anticipate the Quasi War subsequently fought between France and the United States from 1798 to 1800. In pursuing this concern, Washington urges "...good sense, patroitism, self-respect, and fortitude of my Countrymen."

Washington's final State of the Union Address is here printed with The Maryland Herald, and Eastern Shore Intelligencer, a short-lived newspaper published in Easton, Maryland from 1790 to 1799 by James Cowan, the first printer there. An ownership inscription above the masthead indicates that this issue of the newspaper belonged to "J.L. Bozman, Esq." John Leeds Bozman (1757-1823), a graduate of the University of Pennsylvania, was a noted Federalist, Easton attorney, Maryland historian, and the author of A Sketch of the History of Maryland during the First Three Years after its Settlement (1811) and other works.

In contrast to Washington's formal address to Congress, the newspaper contains news of a fire in Baltimore, the arrival at Charles Willson Peale's Museum in Philadelphia of a large group of Native Americans from various tribes and their meeting there with President Washington, and several ads including a list of books for sale by printer James Cowan. Notable among the ads is a $30 reward offered by a woman for the capture of a "Negro Man named Jacob," a notice of the sale of a "Young Healthy Negro Woman, who has been brought up in the House," and a $10 reward for an escaped enslaved female-"A Negro Woman named Darkey."

All items are unconditionally guaranteed to be as described and authentic. All major defects are noted. Images are not to scale, measurements are given. Returns are accepted for any reason within 12 days of receipt. We accept all major credit cards, PayPal, and check. Institutions and libraries may be billed per their budgetary requirements.

All items are subject to prior sale. Title does not pass to the buyer until the purchase price has been discharged in full.

Seller rating:
This seller has earned a 5 of 5 Stars rating from Biblio customers.
Biblio.co.uk member since 2020
Wilmington, Delaware
Ask Seller a Question

leaves
Very generally, "leaves" refers to the pages of a book, as in the common phrase, "loose-leaf pages." A leaf is a single sheet... [More]