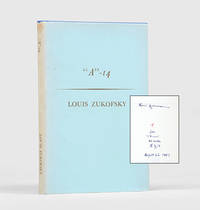 London: Turret Books,, 1967. Octavo. Original blue cloth, titles to rounded spine in gilt, pale blue endpapers. With dust jacket. Minor rubbing to spine ends and tips; a near-fine copy in the jacket with nicks to head of lightly browned spine and faint soiling to rear panel. First edition, signed limited issue, letter "T" of 25 lettered copies. Presentation copy, additionally inscribed by the author below the "T", "for Tom, as ever, L. Z.'s. August 26 1967". The recipient was Tom Maschler, Zukofsky's usual UK publisher, with his Quentin Blake designed bookplate on the front pastedown. Maschler joined Jonathan Cape, who published four of Zukofsky's works, as editorial director, aged 26, in 1960, and became managing director in 1966. He soon became a leading literary force and was crucial in the creation of the Booker Prize in 1969. Zukofsky began his epic poem "A" in 1927; the completed work, a total of 826 pages long, was published in 1978. This segment of the poem, "A" - 14, was first published in Volume 107 of the literary magazine Poetry, issued in Chicago by the Modern Poetry Association. A further 250 signed and numbered copies of this edition were also released.

Cloth
"Cloth-bound" generally refers to a hardcover book with cloth covering the outside of the book covers. The cloth is stretched...[more]
bookplate
Highly sought after by some collectors, a book plate is an inscribed or decorative device that identifies the owner, or former...[more]
spine
The outer portion of a book which covers the actual binding. The spine usually faces outward when a book is placed on a shelf....[more]
gilt
The decorative application of gold or gold coloring to a portion of a book on the spine, edges of the text block, or an inlay in...[more]
octavo
Another of the terms referring to page or book size, octavo refers to a standard printer's sheet folded four times, producing...[more]
rubbing
Abrasion or wear to the surface. Usually used in reference to a book's boards or dust-jacket.
jacket
Sometimes used as another term for dust jacket, a protective and often decorative wrapper, usually made of paper which wraps...[more]
inscribed
When a book is described as being inscribed, it indicates that a short note written by the author or a previous owner has...[more]
First Edition
In book collecting, the first edition is the earliest published form of a book. A book may have more than one first edition in...[more]