Join us June 2–June 4, 2022 for our second virtual antiquarian book fair!
Preregister now for Biblio.live and get $10 to use at the fair.
home Book Collecting Guide The Basics Collecting One Book Collecting Ulysses by James Joyce

Sublime and frustrating, James Joyce’s novel is an exhilarating cocktail of highbrow literary devices and melodrama; it’s riddled with obscure allusions and lowly puns. The Modern Library has since selected it as the greatest English language novel of the 20th century, while users on sites like Goodreads.com rated it the most difficult book in the world. Joyce’s modernist tapestry, which takes place on a single day—June 16, 1904—is challenging and over 250,00 words; it’s ridiculously erudite yet bawdy in the extreme. And so Ulysses’ early publishing history is marked by controversy. 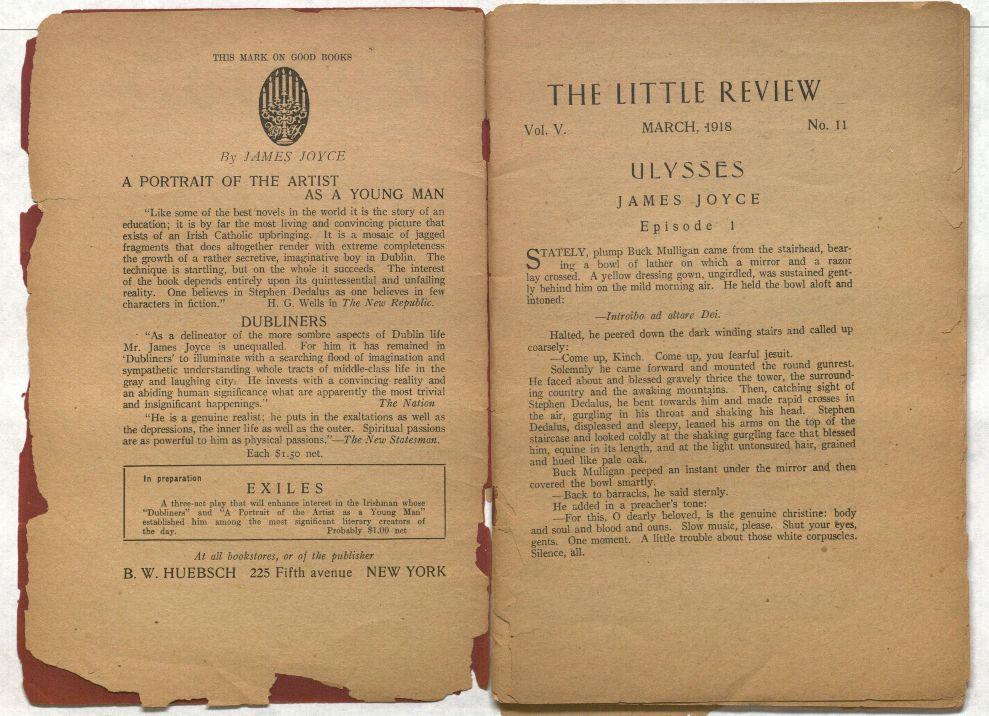 Soon after completion in 1918-1920 the novel was serialized in the Little Review, a Greenwich Village magazine edited by Margaret Anderson and Jane Heap, whose contributors included the likes of T.S. Eliot and Gertrude Stein. The New York Society for the Suppression of Vice had a fit and condemned Ulysses; Anderson and Heap were brought to trial for peddling obscenity and lost their case. Before drinking was a crime, Ulysses had its very own Prohibition, banned wherever it appeared. For the next four years, Joyce struggled to find a publisher willing to not only print his novel, but to face the backlash that would follow. His patron, Harriet Shaw Weaver, tried to lure in various publishers. Not even the modernist stronghold of The Hogarth Press would consider printing Ulysses, although Leonard Woolf called it “a remarkable piece of dynamite”; Virginia was not so impressed, using terms like “diffuse”, “brackish” and “pretentious”. 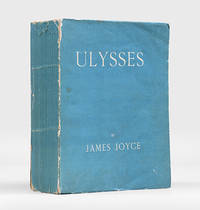 Finally, in 1922, Ulysses found its champion in Sylvia Beach. Proprietor of the Paris bookstore Shakespeare and Co. and an American expat, Beach agreed to release the novel in a limited run of 1,000 copies in plain blue wrappers with blunt white lettering. Of them 750 copies would be regular issue: 150 on large format paper and 100 signed by Joyce himself and printed on attractive Dutch handmade paper. Copies sold quickly and Ulysses was shortly being smuggled on ships bound for America and England, according to Edward de Grazia, “in the bottom of hatboxes, hidden in underwear, stuck under the traveler’s waistcoat, even with the covers of the Bible pasted over it.” A 2nd edition (called the 8th printing on the copyright page) was published in 1926, when the type was re-set to correct the legion of typos in the harried first printing. The Egoist Press edition (1922) was technically the 2nd printing, based as it was on the Shakespeare and Co. plates.

Because of its reputation and scarcity, American bootleg versions appeared in the late 1920s and early ‘30s, notably Samuel Roth’s edition (first serialized in his Two World’s Monthly) and another by the Odyssey Press. 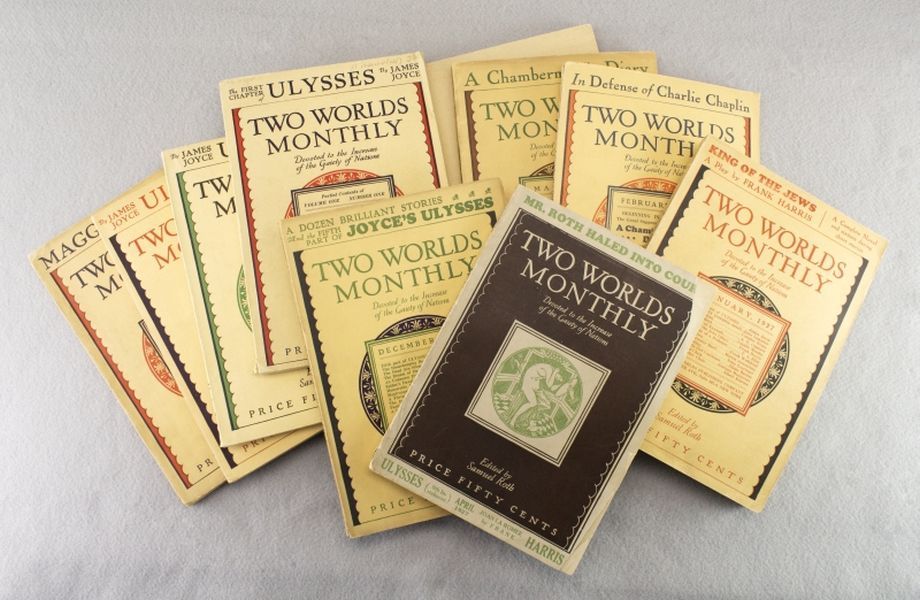 Notwithstanding Virginia Woolf’s chilly appraisal, the cognoscenti all but rhapsodized the book’s qualities. T.S. Eliot, in the Dial, said that Joyce’s work was “The most important expression which this age has found”, and Hemingway, after buying several copies from Beach, called it “a most goddamn wonderful book”. Orwell regretted not being able to write like Joyce, saying that he felt like a eunuch in comparison. 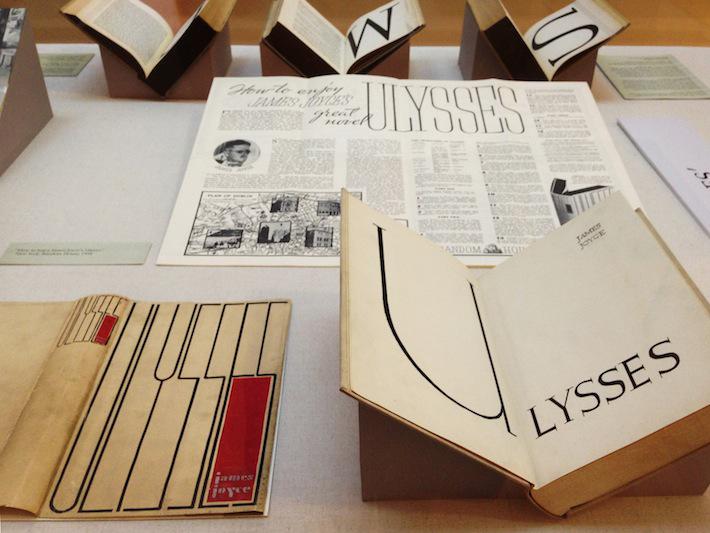 To bring Ulysses legitimately abroad, Random House ordered a copy from France so that it would be confiscated at customs, in order to contest the ban. The resulting trial, United States v. One Book Called Ulysses, concluded that Ulysses was not pornographic. Random House released the novel en masse in 1934 in cloth stamped with the author’s initials, and jacketed in midcentury style. Ernst Reichl’s typographic brilliance was evident—the gargantuan Baskerville capitals have become as iconic as any of the jackets. The Modern Library Giant reprint was issued in 1946 in a jacket designed by E. McNight Kauffer. 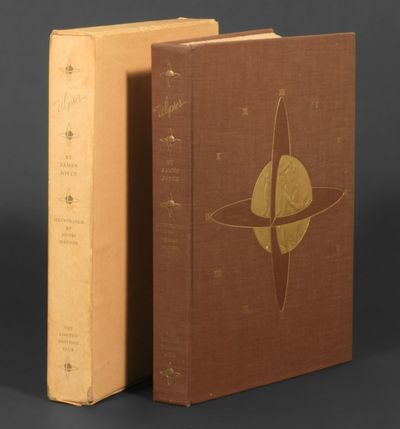 Fine editions of Ulysses were in demand thereafter. Publisher George Macy chose Henri Matisse to render Joyce’s world for the Limited Editions Club edition of 1935. The artist produced 6 etchings and 20 lithographic studies of the etchings. Bound in brown buckram with a gilded globe design and red-speckled edges, it marked the first uncontested edition. All 1500 copies were supposed to have been signed by the author and the artist, but Joyce allegedly stopped signing after 250 copies, when he discovered that Matisse had chosen to illustrate Ulysses with scenes from Homer’s Odyssey.

John Lane, the Bodley Head brought out 1,000 copies in 1936. The octavos were bound in handsome green cloth, gilt with an ancient bow design by Eric Gill, and came in plain dust jackets. Of this edition, 100 very limited issues were signed by Joyce and bound in full vellum. A second Bodley edition followed in 1960. 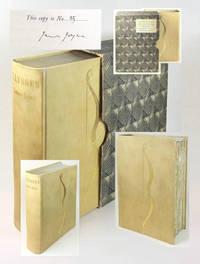 Based on the holograph manuscript bought by A.S.W. Rosenbach in 1924, Octagon Books unveiled a facsimile of Joyce’s own notated proofs in 1975, in three slipcased volumes. The US would receive 1,775 sets, while 750 would be available in England.

A “Critical and Synoptic Edition” edition in 3 volumes was published by The Garland Press in 1984, based on the corrected text of Walter Gabler, at that point the most scholarly revision. Nineteen ninety-seven saw Dublin’s Lilliput Press limited edition in a cloth slipcase, with an introduction by John Banville.

The Arion Press 1988 limited letterpress edition, in an alum-tawed pigskin spine and fore-edges, and white-streaked blue cloth, is an incomparable collector’s item. Forty fascicle etchings by Robert Motherwell come boxed in a portfolio that’s partnered with the slipcased book.

In the late ‘90s, The Folio Society presented their gilt-blocked blue cloth version (a facsimile of the 1926 printing) illustrated with the haunting, idiosyncratic etchings of Paladino Mimmo. Another edition commemorating Bloomsday, 2004, is limited to 1760 copies, paired once again with Mimmo’s art, in a full goatskin binding.