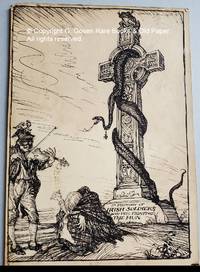 Sullivan, Edmund J. A Collection of Fourteen Original Pen-and-Ink Cartoon Drawings. They were drawn first in pencil, then retraced in ink by Edmund J. Sullivan. These anti-German drawings came after the Irish Uprising during Easter Week in 1916, in which Germany sought to arm the Irish Republican Brotherhood (IRB). In the 1918 General Election, the last all-island election held in Ireland, Republicans won 73 seats out of 105, on a policy of separation from Westminster and Irish independence. E. J. Sullivan's cartoons relating to Germany's involvement in Ireland document the view held in Westminster that Germany was exploiting the desire for Irish independence for Germany's own selfish strategic goals, as personified by the Kaiser. Manuscript annotations on the verso of some of the sketches allow an insight into Edmund J. Sullivan's creative process, as he describes the meaning behind his cartoons.

Edmund Joseph Sullivan (1869 – 1933) followed in his artist father's footsteps, when he chose to work as an artist, choosing book illustration and graphic design. The acerbic satire evident in these anti-German cartoons shows Sullivan's enormous talent and his ability to work under a rush order deadline.

"The Evolution of Wilhelm," signed and dated in the upper right-hand corner Edmund J. Sullivan '18." An image of an Irish cross monument, around which a large snake has wound itself. At the foot of the monument is a grieving woman with her shawl drawn tightly around her. In the foreground, the Kaiser plays the violin in disguise, wearing a mardi gras mask and a crowned eagle on his hat. The inscription, "In Memory of Irish Soldiers Who Fell Fighting the Hun, on the base of the monument. On the verso is the following annotation: "The Evolution of Wilhelm / The Shan van voght and the snake charmer. / The Kaiser, disguised as an Irishman sneaks in professing to comfort the shan van voght, / in her sorrow; and surreptitiously charms back the snake. 'Tu l'as voulu, St. Georges.' / by Edmund J. Sullivan, ARWS." (The Sean-Bhean bhocht, Irish for the "Poor old woman" often spelled phonetically in this song as "Shan Van Vocht"), is a traditional Irish song from the period of the Irish Rebellion of 1798, and dating in particular to the lead up to a French expedition to Bantry Bay, that ultimately failed to get ashore in 1796.) Pencil annotations below the image relate to publication.

A complete list and description of each drawing is available on request.

We ship to the buyer at a verified address. It is important for our customers to understand that we ship to the buyer at this verified address. All material is guaranteed as described and given a life-time guarantee of authenticity. All material is returnable within ten calendar days with advance written notification from the buyer stating the reason for the return. Returned material must be returned in exactly the same condition and secure internal wrapping in which it was shipped for a full refund to be made. Customers are expected to pay for shipping at the time of purchase according to weight, desired speed of delivery and for the insured value of the shipment. Some large, heavy books or sets of books, will require additional shipping. It is recommended that customers request shipments be sent to themselves in their own names by the most secure means to their verified addresses to assure speedy and secure insured delivery. For some customers outside the United States, special arrangements may be necessary to assure safe and secure delivery. We accept checks drawn on United States banks in dollars, as well as payments through PayPal. Sales to residents of New York State and New York City are subject to state and local taxes. All books and/or items remain the property of G. Gosen Rare Books & Old Paper until payment in full has been received. All material is subject to prior sale.

verso
The page bound on the left side of a book, opposite to the recto page.