Description:
Gollancz, 07/09/1992. Paperback. Used; Good. **WE SHIP WITHIN 24 HRS FROM LONDON, UK, 98% OF OUR ORDERS ARE RECEIVED WITHIN 7-10 DAYS. We believe you will be completely satisfied with our quick and reliable service. All orders are dispatched as swiftly as possible! Buy with confidence!
Item Price
US$6.21
US$8.99 shipping to USA

Description:
London: Gollancz, 1992. First Edition Thus. Paperback. Fine. Clean with no major faults. "Signal to noise does not entertain. It scratches, it provokes, it frightens." expanded and revised edition. We ship from Canada. Specializing in academic, collectible and historically significant, providing the utmost quality and customer service satisfaction. For any questions feel free to email us.
Item Price
US$47.17
US$4.99 shipping to USA 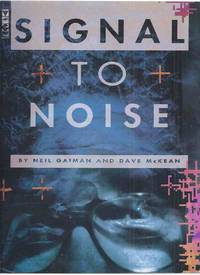 Description:
London, England: London, UK: VG Graphic Novel / Victor Gollancz, 1992, 1st Edition, First Printing , 1992. -----------softcover, about 8.5w x 11.5h inches, a Near Fine copy, a graphic novel by Gaiman withMcKean illustrations, this copy has been signed and inscribed "John Keep the noise loud ! Neil Gaiman", ---The story of a film director who is dying of cancer. His greatest film would have told the story of a European village as the last hour of 999 AD approached. The villagers feel Armageddon is imminent. The director works it all out in his head, a film never to be seen. By no-one but the reader., any image directly beside this listing is the actual book and not a generic photo /// SIGNED ---GUARANTEED to be AVAILABLE///. Signed. First Edition. Soft Cover. Near Fine (see description). Illus. by Dave McKean. 8.5w x 11h Inches.
Item Price
US$59.95
US$14.98 shipping to USA

Description:
1992-01-01. Good. Ships with Tracking Number! INTERNATIONAL WORLDWIDE Shipping available. May not contain Access Codes or Supplements. May be re-issue. May be ex-library. Shipping & Handling by region. Buy with confidence, excellent customer service!
Item Price
US$87.63
FREE shipping to USA