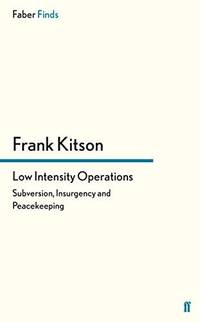 Description:
(Subject: Post World War II - General) Subtitled 'Subversion, Insurgency, and Peacekeeping', this is a reprint of Sir Frank Kitson's acclaimed work. When the book was first published in the 1970s, the US was losing an insurgency in Vietnam, and Great Britain was in its final stages as a colonial power. By that point, Britain had participated in more than 30 low intensity operations, and had been unsuccessful in most of them. Kitson, a veteran of many, decided to put his thoughts on paper as to how he thought these battles could be won. (Published: 2010) (Publisher: Faber & Faber) (ISBN: 9780571271023) (Pagination: 208pp, charts, diagrams) (Condition: Very good in card cover) UL-XXXXXX
Item Price:
£20.70
£22.00 shipping to USA