2. Citations from the Reviews Preface by famous Russian writer Ruslan Kireev to the "October" publication: "It is the story of a boy ... told in a severe, rugged, and vigorous way. Here one believes every word. Moreover, one believes that the author did not conceal anything for the sake of some falsely understood propriety ... He did not even spare himself ... The author wants only to tell everything out to the end, wants only not to carry it away with him ... This is the way one should write his first book, or his last book – write like he lives, one time and one time only." Moscow magazine "Znamya", review by I. Vasuchenko: "There is something miraculous in the Polyak's courage and inspiration. He has described the indescribable ... His depiction has the powerful and complicated effect of double vision. The images of the narrative are split. Behind the beastly mugs of the children, disfigured by 'the best system in the world', the faces of human beings sometimes opened up a little ... Polyak's prose, a risky combination of the high literary lexicon and the lowest street jargon, flush with naturalistic details, ... includes a powerful charge of poetry ... The author meditates about the tragedy of human destiny rather than about concrete problems of the past or present … The features of the epoch he depicts, psychological as well as everyday life, are captured perfectly ... In the book, the nature of violence against word and against human is the same. ... Polyak's narrative is terrifying, yes. But in all sincerity, it has been a long time since I have read anything more kind." The "October" editors: "Polyak's narrative was found in the routine flow of our everyday mail, a rare success both for the author and for the magazine. The manuscript's hard truth has seduced us and won our hearts ..." . "Greater Washington", No. 2(11), 1998, preface by C. Kuznetsov, Editor in Chief: “Saying that reading the Polyak’s prose arouses shudder or shock means saying nothing at all ... Comparing with his truth, bitter, terrible truth, other writings about relationships in the children's environment are childish prattle ... Author courageously, regardless of himself and anyone else, set off a sweet veil of the childhood. And we see Horrible Revelation ... The author managed to survive … only thanks to the God’s help, given him to describe all of this. The author has carried out his mission perfectly.” "Jewish Journal", October, 2000. Editor Julia Zhorov: “Polyak’s book is also an adventure story with an intriguing plot. There are dozens of fragments of Russian thieves’ songs, ranging in mood from tragic despair to joyful madness.” Scientists-philologists of a new direction of Russian linguistics, GULAG’s Folklore, refer to the publication of my book. For example, there are numerous references in "Historical and Etymological Thieves' Cant Dictionary" (St. Petersburg, Folio-Press, 2000) by M.A. Grachev and V.M. Mokienko. Оustanding specialist in the XX century Russian folklore professor B.N. Putilov in his monograph "Folklore and National Culture" (“Nauka” Publishing House, 1994) writes: "It is difficult to study (though it is proclaimed by scientists) special psychological and health caring role of folklore as rescue from different kinds of repressive forces, which are imposed by society on a person. As examples of these, apparently, typical situations of folklore texts existence in extreme conditions could serve. In I. Polyak narrative "The Songs of the Bedraggled Children’s Receptor-Distributor” (OCTOBER, № 1, 1990, Moscow), which we have the right to consider as authentic document of the time, it is depicted a world where such extremity is a norm of life. Children, who survived loss of families, arrests of parents, troubles of the WWII, have placed in the orphanage. Hungry existence, full lawlessness of youngsters and wild brutality of grown-ups, moral disintegration of persons whose characters have not yet mould up – those are the conditions, where special folklore repertory exists: criminal songs, refined curses, cynical vows and stories about "heroic" affairs "at liberty". But on this gloomy background the songs are something absolutely special, which – in the language of that environment but romanticized and purified – bring completely other motives, causing the strongest emotional discharge of the suffering kids, battered and enslaved by life.” B.N. Putilov "GULAG's Folklore as a Fact of Culture", International Conference "GULAG's Folklore" (St. Petersburg, November 1992): "There is no literature text about GULAG without examples of folklore of criminals. Here I can mention not so much known narrative "The Songs of the Bedraggled Receptor-Distributor Center for Orphans (October, #1, Moscow,1990) by Ilya Polyak, which is saturated with the patterns of speech folklore and songs' folklore. The value of his examples is in the fact that they are opened to us in the living context, in the atmosphere of childhood, drawn into 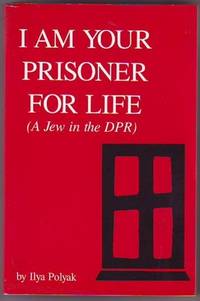 Description:
New York: Vantage Press, 2000. Fiction based on the author's experiences, this tells the story of a young Jewish boy who, after his parents are exiled to prison camps, ends up in a Children's Receptor-Distributor, which is an orphanage more closely resembling a juvenile prison, and where acts of degradation and physical and mental cruelty are the norm. Originally published in the Moscow magazine, October. 271 pages. Moderate general wear.. 1st English-language edition. Trade Paperback. Very Good. Octavo -- from 7.75" to 9.75" Tall.
Item Price
US$12.50
US$15.00 shipping to USA