MARGERY WILLIAMS was born in London in 1881 and first came to the United States at the age of nine. For the rest of her life, she lived alternately in England and America. Her first novel was published when she was twenty-one, but she turned to writing for children in 1922 with the publication by Doubleday of The Velveteen Rabbit, the first and best-known of her thirty books for young people. Toward the end of her life, she lived in Greenwich Village, New York. She died there in 1944.  WILLIAM NICHOLSON was born in Newark-on-Trent, England, in 1872. Though he illustrated several books during his lifetime, he became most famous as a portrait painter. Many of his portraits and still lifes hang today in museums and galleries throughout England. He was knighted in 1936, and died in 1949.

Description:
Doubleday Books for Young Readers. Hardcover. 0385375662 BRAND NEW, GIFT QUALITY! NOT OVERSTOCKS OR MARKED UP REMAINDERS! DIRECT FROM THE PUBLISHER!|VCF . New.
Item Price
US$13.66
US$3.99 shipping to USA 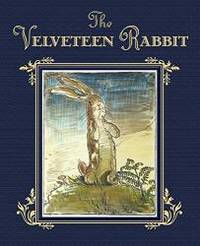 Description:
2014-08-07. Good. Ships with Tracking Number! INTERNATIONAL WORLDWIDE Shipping available. May not contain Access Codes or Supplements. May be re-issue. May be ex-library. Shipping & Handling by region. Buy with confidence, excellent customer service!
Item Price
US$48.18
FREE shipping to USA