Description:
Farrar, Straus and Giroux. Used - Good. Used - GoodEX- LIBRARY BOOK -This item shows wear from consistent use but remains in readable condition. It may have marks on or in it, and may show other signs of previous use or shelf wear. Item may have minor creases or signs of wear on the exterior. Item is packed with care, shipped promptly.
Item Price:
£3.49
£3.27 shipping to USA

Description:
Farrar, Straus and Giroux, 1992-12-01. Hardcover. Good. 0.9000 7.5000 5.0000. Dust jacket show heavy shelf wear. Pages are clean and intact. There is some slight dirtiness on the textblock/fore edge from handling. Has some minor dirtiness on the outside from handling.\r\nCover and edges show light shelf wear. Light scuffing.
Item Price:
£5.68
£3.27 shipping to USA 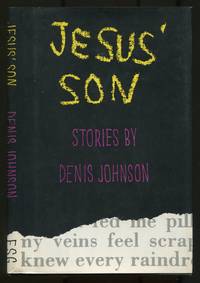 Description:
New York: Farrar, Straus and Giroux, 1992. Hardcover. Near Fine/Fine. First edition. Tiny stain on one page (affecting the text), upper hinge starting, but neatly strengthened, near fine or better in a trifle rubbed about fine dust jacket with a tiny abrasion on the rear panel. In 1999, the book was adapted into a film of the same name, directed by Alison Maclean and starring: Billy Crudup, Samantha Morton, Denis Leary, Jack Black, Dennis Hopper and Holly Hunter. Johnson appears in the film briefly, playing the role of a man stabbed in the eye by his wife.
Item Price:
£205.10
£3.69 shipping to USA